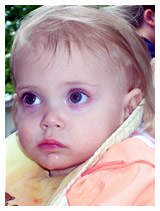 My name is Lacie Wivell and this is my story. I was born on April 8, 2004, to Rick and Lisa Wivell. I had two older sisters, Amanda and Rikki, and two older brothers, Levi and Colby. I also had another brother, Dakota, that went to be an angel in 2001.

I enjoyed being held, eating, and sleeping during the first few months of my life, I was a little lagging in my development, but Daddy and Mommy thought they just did not give me enough time on my own; you have to remember I had my 2-year old brother running around, busy all the time.

When I was around 5 months old, Daddy, Grandma, and my Aunt Cat noticed that I could not control my eye movement, and it was very hard to focus on things. My mommy took me to my 6-month checkup on October 29, 2004, and questioned the nurse practitioner about my eyes. She recommended that I see a Pediatric Ophthalmologist. We would not have been surprised if I did have a lazy eye, as it is hereditary. Mommy made the appointment right away; we were scheduled for our visit on November 10, 2004.

On November 10, Mommy and Grandma took me on a long road trip to York, Pennsylvania for an appointment with the best Pediatric Ophthalmologist in the area. He put some yucky drops in my eyes and we had to sit and wait until he could see in my eyes. After waiting about 45 minutes, the doctor shined some bright light into my eyes. He then left the room for a few minutes. This was a little confusing, but I thought he had to check on another patient.

The Most Tragic News We Could Ever Hear

When he returned to the room, he told us the most tragic news a parent or grandparent could ever hear. He found cherry red spots in the back of my eyes. Okay, so what does that mean, big deal? What do we have to do to fix it and make them go away? There is nothing that can be done; we were told I could have one of three storage diseases: Tay Sachs, Sandhoff, or Niemann Pick, which are all fatal in early childhood. We went straight to my pediatrician for a physical and nasty old blood work. My pediatrician told my Daddy, Mommy, and Grandma that she was pretty certain I had Tay Sachs Disease and would have an average life span of 3-5 years. I had to wait until Monday, November 15 for my blood work to be done.

Mommy and Grandma took me on Monday for my blood work; we were told if it was positive for Tay Sachs Disease we would know in a week. We prayed so hard through the entire process that it would not come back positive, this was just a "fluke". On Monday, November 22, my pediatricians called and wanted to see us. We went to the pediatricians office and were told that I had Tay Sachs Disease. What does this mean? I can sit, roll, grab things, hold things, and bear weight on my legs. There is no way I had Tay Sachs.

In January, I started having physical therapy once a week. I was doing great and even sometimes trying to do an army crawl. It seemed as though I was different than the other Tay Sachs Disease angels. Maybe I would be the "miracle child", the one to go down in history because a cure was found in time to save me and so many of my other friends.

After two more trips for second and third opinions, I guess we finally accepted that it was true. In January 2005, we found out about a trial medication called Zavesca. It took until April for me to finally start the medicine. At first, it seemed as though I was more alert and attentive to things. We also went to our first Tay Sachs and Allied Diseases Conference in April. I met a lot of new families and friends there.

Upon returning home from the conference, Mommy and Daddy started seeing some changes in me. I lost the ability to roll and sit. I really tried hard, but just could not do it anymore. The months of May and June were also hard months for us. My breathing had become so much harder and labored, and we believed I was starting to aspirate on my food and fluids. This was all so new to us, and we were not sure what to do. The summer months flew by and I became worse and worse each day. My Daddy and Mommy just said we have to take this minute to minute and cherish every minute we have.

After several bouts of ear infections and upper respiratory infections, I was diagnosed with Aspiration Pneumonia on August 4. The decision was made that it was time for me to have a G-tube put in place. That means instead of taking food by mouth, I would now have a "Mickey" in my belly and the food would be directly put into my tummy to by-pass my lungs and hopefully I would not aspirate anymore and suffer with all these infections.

On Friday, September 2, I went into surgery for my G-tube. I came through the surgery like a pro. My vitals stayed great and Mommy and I were sent home the next day. Although it took awhile for my Mommy and Daddy to get a hang of the new feeding process, they quickly became pros at it. After my surgery, Mommy and Daddy were approved for nursing care 3 days a week. That way, my Mommy could still work part-time to receive our health insurance. My nurse, Kat, was heaven sent and started on September 19. She was wonderful; she played with me, brushed my hair all the time, and loved to give me massages, which I absolutely loved.

The last weekend of September, I started having seizures. I had several during the weekend. Mommy called my neurologist on Monday and he stared me on anti-seizure medicine right away. Once the medicine was in me, I stopped having seizures. I went to my pediatrician and he diagnosed me with Pneumonia on September 27. I was put on Augmentin. After a few days, I was having severe diarrhea. I went back to the doctors and had some blood work, it showed I was mildly dehydrated. We stopped that antibiotic and decided not to put me on another right away.

On Friday, October 7, Kat called my Mommy home early because my breathing respirations were very high and I had a fever. Mommy and Kat took me to the doctor, and I was put in the hospital for the weekend. It was very touch and go for awhile on Friday, but being the fighter that I am, I pulled through it. We were sent home on Sunday with a new antibiotic, Zithromax. I finished that on Thursday, and by Friday morning I had another fever of 102. Back to the doctor Mommy, Kat, and I went. The pneumonia still had not cleared up and we were now on to the fourth antibiotic. We now had Hospice coming to see me 3 times a week and were equipped with everything at home that they would do for me in the hospital. Going to the hospital was not a good option for me as I could pick up so many other germs.

By Friday afternoon, my vitals were starting to drop. We lost count after about 30 seizures in the afternoon. We started oxygen around the clock, and breathing treatments every 2 hours. On Sunday, I was feeling better, smiling and giggling, and my big eyes were glowing.

We were now approved for nursing care 5 days a week. My Mommy stayed home with me and Kat all this week. Monday was not as good as Sunday; I started having more seizures on Monday evening. I just couldn't stop them anymore. We had a lot of visitors this week. I knew things were not too promising for me right now. On Wednesday, Kat told my Mommy and Daddy she thought I only had about 48 to 72 hours to live. I started building up with so much fluid and was not peeing very much. 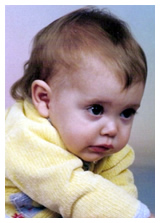 On Saturday night the angels, came to see me. They told me that it was okay to stop fighting. I stopped breathing for about a minute and then I came back. I know Mommy and Daddy wanted me here, but I could no longer fight this battle, my little body was so tired.

Daddy, Mommy, and both my Pappys and Grandmas believed my spirit left Saturday night, but my heart continued to beat. I spent Sunday in a very vegetative state. I did not respond to anybody. There were no seizures, my breathing was more regulated than it had been in months, and I was very comfortable.

At 6:25 on Sunday, October 23, 2005, I took my final breath at 18 months of age. I passed away very peacefully in my Daddy and Mommy's arms with all my family surrounding me. I know this is hard for some of you to believe, but I had a smile on my face. I had been an angel from day one, but now I officially had my wings.