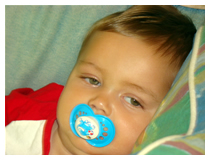 Charles Lee Anderson was born on February 26, 2006 to Bryce and Amy Anderson. His sister Anna was 14 and brother Ben was 11. Charles Lee was so perfect.

None of us could imagine that anything was wrong with him. He was so precious and beautiful.

The Worst Day of Our Lives

Charles was diagnosed with Infantile Tay-Sachs Disease on March 27, 2007 at the age of 13 months old. This is the day that we also learned that there is no cure or treatment for this disease. It was on this day that our lives were greatly impacted. We learned that our precious baby Charles wouldn't live to be very old.

It was at about 10 months that we really started wondering what was wrong with Charles. Up until then we just thought - or maybe hoped - that he was lazy. With 2 older siblings and parents that adored him and held him all the time he didn't have much time to learn to do the things he should.

Charles progressed normally until he was about 6 months old. At 6 months he still wasn't sitting unassisted for very long periods of time and he had only rolled over a handful of times. One thing that really bothered us, especially my mom, was that he still had his startle reflex, which normally disappears a few months after birth. When mom would ask his pediatrician about this, she just said that he had an under-developed nervous system.

At 10 months old, Charles started therapy. We were hoping that this would start getting him motivated. He went to PT and OT once a week for about 4 months. It was about a month after his diagnosis that it was decided the therapy wasn't helping and he stopped going.

By the time he was diagnosed, we felt the disease had already greatly affected Charles.

By the time he was diagnosed, we felt the disease had already greatly affected Charles. He was no longer sitting up and he could no longer hold his head up for more than a few seconds. Yet he would still light up a room with his beautiful smiles and belly laughs.

Charles is now 22 months old. He has seizures regularly, but they are partially controlled by seizure medication. He has lost his ability to laugh and his sight. We are sure that he can still hear us though.

Charles was approved for hospice care one day a week when he was about 16 months old. Now his wonderful hospice nurse, Cindy, comes a couple times a week depending on how he is doing.

We cherish everyday that we have with Charles. We know that he won't be with us very long but we want to make sure that he is comfortable while he is.

In the short time that Charles has been alive he has touched so many lives and we are grateful for that. Charles has brought awareness about this disease to so many people and we hope that our story can keep someone else from going through this.

We have many memories with Charles and hopefully we will have many more. Charles has taught us so much about life and we know to cherish everyday that we have with everyone that we love.

For more information about Charles and updates on his health and family please visit: http://www.caringbridge.org/visit/charleslee.