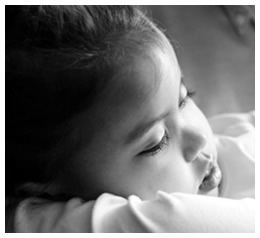 Emma Rose was born on May 17, 2004. She was very eager to enter our world - arriving before my doctor could even get to the hospital! She was a beautiful, healthy, and sweet baby. We were so thrilled for her to join our family, and to have a loving relationship with her older brother Jake, who was 2 1/2 when she was born.

Emma developed normally for the first 5 months. She rolled over at 4 months and began sitting up at 5 months. Around 6 months, I noticed that Emma was not reaching any new milestones. She was still sitting unassisted, but at the same level as she was the month before; a bit unsteady and not completely balanced. She was rarely reaching out for toys that were in front of her. I spoke to friends and family, expressing my concern that something was wrong; most likely a developmental delay, but everyone tried to reassure me that Emma was fine and that she was just developing more slowly because she was a girl.

November 2004 was the peak of Emma's development. She was such a happy baby and would beam a huge smile whenever she saw a camera. Little did we know that gorgeous smile would eventually fade.

I had a gut feeling something was wrong

By December, I had a gut feeling that something was definitely wrong. Emma had stopped rolling over and had not reached any new milestones. On New Year's Day 2005, I noticed that one of Emma's eyes began drifting slightly. I called the pediatrician the following day and she referred me to a pediatric ophthalmologist. After much worrying, I convinced myself that she must just have a lazy eye which was causing her to have trouble with her physical development. I figured that the ophthalmologist would say she needed to wear a patch over her eye - something we could certainly deal with.

January 11, 2005 is a day that will be permanently etched in our minds. We brought Emma to the ophthalmologist. After dilating her eyes, he found cherry red spots on her retinas. The doctor tried not to alarm us but we could tell that something was wrong. He immediately referred us to a retinal specialist, where we went as soon as we left his office. The retinal specialist quickly confirmed the cherry red spots but told us that she most likely had some type of metabolic disease that could be controlled by her diet. We felt a little more relieved after leaving his office.

However, as soon as we arrived back at home, the ophthalmologist called and told me that we should see the chief geneticist at our local hospital as soon as possible. I made an appointment for the next day.

I had been tested for Tay-Sachs disease

Later that evening, I looked up cherry red spots on the internet. Almost all the research led me to articles on Tay-Sachs disease. After reading the description of the disease, I had a complete breakdown; surely this could not be afflicting our sweet Emma. I remembered that I had been tested for Tay-Sachs disease, as well as several other diseases common to the Ashkenazic Jewish population prior to becoming pregnant with our older son. The results had all come back normal.

On January 12, we met with a genetics counselor and one of the geneticists at Hackensack University Medical Center in New Jersey. The first thing our counselor said was, "Whatever you hear today is not going to be good news." At that point, my heart sunk. We were told that Emma most likely had one of a handful of lysosomal storage diseases - all of which were incurable. She had blood and urine taken, in order determine her diagnosis.

After waiting 2 long, painful weeks, we were told on January 24, 2005 that Emma had Tay-Sachs disease. At that moment, I felt as though someone stuck their hand in my body and tore out my heart. We were told that Emma would gradually regress - that she would begin to lose all of her motor skills and eventually lose her vision, her ability to swallow and possibly her hearing, and that she would develop seizures. We were also told that the life expectancy of children with Tay-Sachs is between 1 and 4. At that time, I was tested once again, along with my husband, to find the exact mutation of the disease. This time the results of my tests showed that I was clearly a carrier for Tay-Sachs. The results from this test and my previous test differed greatly. There was obviously a huge error in my original screening test.

Soon after Emma's diagnosis, she became very irritable, needing to be held almost all day. She seemed much more lethargic, she would often get a blank stare on her face, and we noticed that she had a very pronounced startle response; a classic early symptom of Tay-Sachs. By the time she turned one, she could no longer sit unassisted and she hadn't developed any new skills.

In June 2005, Emma stopped focusing on us when we would talk to her. Her eyes would fixate somewhere else, almost as if she were intentionally ignoring us. Soon after, she developed seizures, which were mainly triggered by repositioning her. She began having more and more trouble eating meals, and our fears of aspiration increased at every feeding. She began losing weight quickly. We decided in November 2005 to have a G-Tube placed - a decision that was very difficult for us to absorb. Emma spent her 18-month birthday in the hospital recovering from the surgery.

Take nothing for granted

Since then, Emma has lost her vision completely. Her seizures have manifested in many different forms. She has fought 2 cases of pneumonia and 1 case of RSV, in addition to several respiratory infections. She still smiles and giggles a few times a day. And while we have been told that these giggles are really seizures, we prefer to think of them as true laughter. We have not heard Emma cry since Feb. 2007. She has no independent movement, other than the ability to slowly turn her head at times. However, she still recognizes the voices, smells and touch of those people most familiar to her. Her responses are very subtle yet they are very clear to us.

Emma is our little ray of sunshine. She possesses a warmth and sweetness which radiates around her. Just holding her brings us a sense of calmness and peace. Emma defines the word patience. Despite her lack of physical strength, her inner strength is amazing. She has taught us the most important lessons in life - most of all not to take anything for granted, and to treasure even the smallest of things. She has touched so many people's lives - she is a true inspiration to us. We treasure each and every moment we have with her.