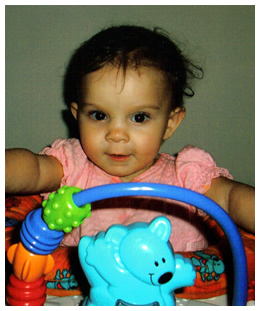 Molly Grace was born on September 26, 2003. She was born 2 months early and weighed only 4lbs 0oz. Although she was so small she was very healthy. After only 2 and a half weeks in the hospital we got to bring her home.

I noticed early that Molly's milestones were behind, but her doctor kept saying she was delayed because of her being premature. Deep down I had a gut feeling it was something else, I guess it was a motherly instinct.

As Molly got older, she became farther behind. At 8 months old she still could not sit on her own or even try to crawl, and was just beginning to roll over on her side.

When Molly was 9 months old she was diagnosed with Spastic Diplegia, which is a form of Cerebral Palsy that affects the legs and not the hands. Although she could not sit, stand, crawl or walk, she had good use of her hands and she could play with toys, attempt to feed herself, and clap her hands to music and when asked to play pat-a-cake.

She Continued To Get Weaker...

Around her first birthday she began having slight seizures and she had to be put on medication to control them. Shortly after she seemed to be declining in what she used to be able to do. Her neurologist thought it was her medication making her drowsy and we spent 6 months changing and trying to get her used to new medication, but nothing seemed to help. She continued to get weaker and her seizures kept coming, several times a day.

At 16 months old she could still play with toys and clap her hands, but she seemed to stop using her hands as much. She began to lose weight and seemed to be losing her muscle tone, despite all the therapy she was doing for the CP.

At 17 months she lost her head control all the sudden, and would no longer use her hands. When I placed objects in her hand she could not hold on to them. I called her neurologist and she told me to bring her in for a spinal tap to rule out a metabolic disorder. I had no idea what that meant and I was not real concerned. I was convinced it was her medicine making her so weak.

Her Doctor Had Tears In Her Eyes...

On April 5, 2005 when Molly was 18 months old we received the devastating news. My beautiful perfect baby had a rare degenerative disease called Tay-Sachs. We had no warning ahead of time of what it could possibly be. Something deadly was the last thing on my mind. All of her prior tests from the spinal tap had come back normal and I thought that visit was just for a checkup.

My plans were to tell her doctor to just wean her off of the seizure medicine because her seizures were only small ones. I took pictures with me of Molly playing with toys, sitting up barely supported and eating her first birthday cake to show her doctor how much different she is now. After the pictures her doctor had tears in her eyes and said "I have a diagnosis for Molly." Molly's neurologist was 4 hours away in Cincinnati, Ohio and that day Mark was not able to go to the appointment with me. Luckily my sister had made the trip with us, so she was there to drive us home. It was the longest 4 hours of my life. The whole trip I was dreading having to go home and break the news to everyone.

The last thing I can remember about my conversation with her neurologist is asking her how long does she have before she loses everything, she replied "2-4 years". For the first time in my life I realized what a real broken heart felt like. I had chest pains and actually felt like my heart was going to stop beating. No parent should have to get the news that their child is going to die. 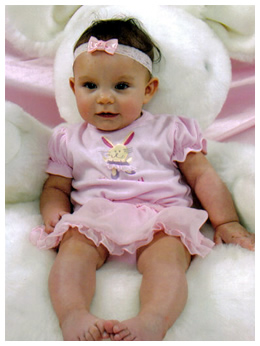 After the diagnosis I had a hard time putting Molly down, I wanted to hold her as much as I could because I know knew that my time was limited. It was hard for me to look at my smiling, laughing 18 month old and know that she would eventually lose that ability like she had already lost her ability to play with her toys like she could before. She had already begun to have eating difficulty and it would take her so long to drink a bottle due to her muscle weakness, finally I had an explaination for the weight loss. We sceduled a swallowing study right away and it showed that she had already began to aspirate thin liquids so we had to thicken her formula for her to be able to swallow it.

At 19 months old she lost her ability to swallow any food without aspiration and had to have an NJ tube placed in her nose into her stomach to be fed. At 20 months old we had her g-tube placed to give her the nourishment that she needs.

Molly is now almost 4 years old. She has now lost her gorgeous laugh and smiles only happen during strange seizures. She is now blind and has lost all muscle control. I have not heard her cry since October 2006 and she frequently gets pneumonia from aspirating her secretions.

Since April 2005 I have dedicated my life to taking care of my Tay-Sach's child. I have informed just about everyone I come in contact with about Tay-Sach's disease, hoping to prevent it from happening to someone else. The chances of preventing Tay-Sach's Disease from happening to someone else is slim, but the chances of finding a cure is possible and I owe it to my precious Molly to do what ever that I can to help make that happen.