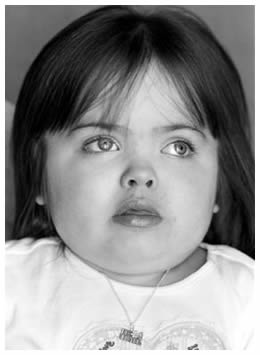 Elise Catherine ten Berge was born on February 5, 2003. She was our first child and as all new parents do, we thought about what Elise's future would be like: her first word, her first step, and her first day of school. Little did we know that Elise had a degenerative disease called Tay-Sachs which was already ravaging her central nervous system. Elise would never have a first word, first step or first day of school.

Elise appeared completely normal at birth and reached the developmental milestones she should have for the first few months of her life. At nine months old, she was able to roll over onto her stomach and hold toys, but she was not able to sit up. At first, Elise's pediatrician told us "not to worry" because all babies reach their milestones at different times.

Even though the doctor said not to worry, we were worried. When Elise was almost 10 months old, she was evaluated be an Occupational Therapist. This evaluation led to an appointment with a pediatric neurologist. An MRI revealed some abnormalities in her brain, which indicated that she could have some type of metabolic disorder. Blood/urine tests and a muscle biopsy did not produce a further diagnosis.

By the time Elise was 13 months old, despite physical and occupational therapy, her fine and gross motor skills had regressed to the point where she could no longer roll over or hold toys. Her startle response to noises worsened. At the time, we were unaware that the startle response Elise was exhibiting was a classic characteristic of a child with Tay-Sachs.

A new pediatrician suggested that we take Elise to have her eyes checked because "some metabolic diseases can be diagnosed that way." At the end of March 2004, an opthamologist dilated Elise's pupils and found cherry red spots. We thought this was great news - we would finally be getting to the bottom of all this. We were hoping that this information would lead us to a diagnosis, which meant we could start treating Elise and help her get better. We had no idea that cherry red spots were the worst possible thing the eye doctor could have found.

On April 15, 2004, when Elise was 14 months old, we took her to a pediatric neurologist in New York City. After reviewing Elise's records, the first question the doctor had was about our heritage. I knew where he was leading with that question because I had done some internet searches on cherry red spots. Everything I read was leading in the same direction - infantile Tay-Sachs disease. The only piece that didn't fit with everything I read was that Ashkenazi Jews were high carriers of the Tay-Sachs' gene. When I told the doctor that we weren't Jewish, I will never forget how he said, "It doesn't matter." A blood test confirmed that Elise had infantile Tay-Sachs disease.

The doctor informed us that most children with Tay-Sachs don't live past the age of 3. We were told that Elise was going to go blind, deaf, have seizures, need a feeding tube for nourishment, lose all mobility and become unaware of her surroundings. To make matters worse, I was already 28 weeks pregnant with our second child. There was a 1 in 4 chance that the baby I was carrying would also have Tay-Sachs disease. At 30 weeks pregnant, I had an amniocentisis which thankfully predicted that the fetus was unaffected. When Elise's little sister, Caroline, was born in July 2004, we had her cord blood tested which reaffirmed that she did not have Tay-Sachs disease. 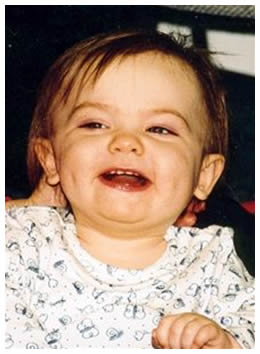 Elise started having seizures when she was about 18 months old and she had her feeding tube placed when she was 20 months old. Elise can no longer see, she doesn't giggle (except during giggle seizures), smile, or cry anymore and she sleeps most of the time. Elise suffers from chronic respiratory issues and has been hospitalized for pneumonia and RSV. She requires 24 hour care and is under constant monitoring. She does still respond with a mad face to things she doesn't like (brushing her teeth, changing clothes, deep nasal suctioning). She also responds with little coos and sighs to let us know that she is okay, and we love those.

We have chosen to celebrate Elise's life

Instead of focusing on all of the things that Tay-Sachs has taken away from Elise, we have chosen to celebrate Elise's life. No matter how short her life will be, we have witnessed that it has been a life of value and meaning. In the end, Elise's life will be measured by memories, not by years. She has taught us numerous things, most importantly, that life is precious. We have learned the wisdom of a lifetime from Elise in just a few years. For that, we are forever grateful.

If love was the cure, Elise would live forever.