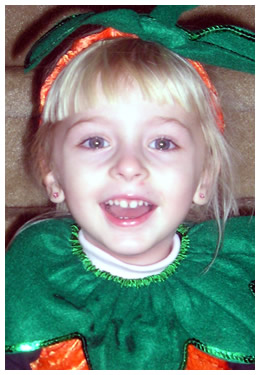 My name is Alexis Nichole Markowich or just "Lexi". I was born on March 9, 2001 to Craig and Nichole Markowich and I also have a big sister Brianne. When I was four, on August 4, 2005, we got the devastating news that I had Juvenile Onset Tay Sachs Disease (JOTSD).

On December 30, 2005, I had a cord blood transplant from an unrelated donor at Duke University Medical Center with hopes of stopping the progression of the disease and making my life more comfortable. In September of 2006, when I was nine months post transplant, I got a bacterial infection in my blood that my weakened immune system could not fight and I passed away on September 14, 2006.

Alexis was born a very healthy baby at 6 lbs, 8 oz...or so we thought. There are no newborn screening for TSD in Ohio and most other states, because there is no cure at this point. She reached most of her goals early or on time, such walking at eight months.

After she turned two, she became more and more clumsy, dropping things and having poor motor skills. She could never jump or write her name, but her speech and other things seemed to be all right.

After she turned four, we began to really worry, even after an MRI was "normal." She seemed to be getting weaker and falling more, startling at loud noises, and always getting sick...not the healthy child she once was.

We were put off a lot by our neurologist, always told to come back in three months; maybe she would have new symptoms. He wanted us to wait six months to see a geneticist at the Cleveland Clinic and that was the final straw. We contacted a geneticist at Rainbow Babies and Children's Hospital who personally called us at home and saw us within three weeks. I knew when I got off the phone with him that he was going to help us and would figure out what was wrong with Lexi.

Our appointment was July 12, 2005 and while there he even went out and talked with other doctors to get their opinions. While on vacation in Arizona, we got a call from him that they needed more blood from Alexis and to set up an appointment when we got back. I knew then that he had an answer. I even tried to contact the lab to find out what test he was running again but they told me they did not know.

On August 4, 2005, we met with him to get the results. He had only sent one test out for something that was not treatable and I knew by the look on his face that it was the one that came back positive. The diagnosis was Juvenile Onset Tay Sachs disease.

This was the second-worst day of our lives, next to her passing. After your child is diagnosed, you begin to mourn their loss while they are still with you. I had cried a lot and tried to prepare myself for the worst in advance. My husband, who is always an optimist and thinks the best, cried. It was the first time I ever saw him cry and it was horrible. Alexis was so sweet looking at us like "what is your problem?" She even gave our doctor a hug before we left. I'm sure it broke his heart to be the one to tell us she had JOTSD.

Six days after her diagnosis, we found Dr. Joanne Kurtzberg online and e-mailed her about Alexis. Dr. Kurtzberg is a leader in cord blood transplants out of Duke Medical Center. She e-mailed us back right away and after a month of research on our part we contacted her again. We scheduled a week of tests for Alexis to be evaluated. "Dr K," as we know her, felt Alexis was a good candidate for transplant. We had two bad choices: to fill her body full of chemo and give her new cells and hope they get to the brain and help, or let her progress with the disease and die. 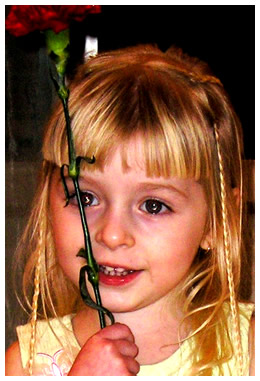 We chose hope, even if it was only 1% hope. Cures have to start somewhere, it just sucks when it starts with someone you love. Having a transplant comes with complications. Alexis had several bacterial infections along the road but nine months post-transplant, the last one took her life. Her immune system was suppressed from a drug to treat another problem and the bacteria proved to be stronger than the previous ones she had.

She spent less than 24 hours in the PICU. Because she was septic, her blood pressure was not high enough to keep her body functioning properly. She was on three blood pressure medicines set at the highest dose possible, even though there are no maximums in the PICU. We told them to keep the medicine at the level they were and let her decide if it was her time to go.

She only knew love...

We saw so much at Duke with other children spending so much time in the PICU only to pass away. We never wanted Alexis to suffer. Although things did not turn out the way we hoped, we do not regret any of our decisions. We know Alexis helped to further science that would aid future children with Tay-Sachs disease. Alexis is now our Angel watching over us and we know in her life she only knew love.